Your community, Your world, Your future, our Commitment.
Close

We are here not for income, but for outcome

[vc_column_text]Rotary began from the inspiration of one man, Paul P Harris.  On February 23rd 1905, the young lawyer met with three business associates in a small office in downtown Chicago.  The group chatted about the weather, their relatives back home, and about starting a “booster club”.  This unassuming group of friends would eventually lay the ground work for the world’s first service organization.

Rotary Club members are ordinary people who together accomplish extraordinary things.  Today there are more than 1.2 million rotary members in 166 countries.  Thanks to the Rotary Foundation, Rotarians have provided more than $1.4 billion for service projects all over the world.  Rotary supports the world’s largest privately funded international scholarship program and sponsors one of the world’s most popular youth exchange programs.  Rotary has been leading in the global fight against polio, saving millions of children from the crippling disease.

Rotary After Hours-Twin Falls was established in 2010 by a group of people looking to make a difference in the community, but were limited to meeting after work hours.  Rotarians stand united by their motto “Service Above Self”.

If you would like to visit or become a member of Rotary there are 3 Rotary Clubs in Twin Falls.  The Blue Lakes Rotary Club meets every Tuesday morning at 7:00 a.m. at the 9 Beans and a Burrito the Twin Falls Rotary Club meets at noon on Wednesdays at the Turf Club, and the After Hours Club meets on Tuesday evenings at 5:15 p.m. at Canyon Crest. 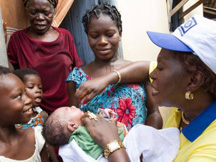